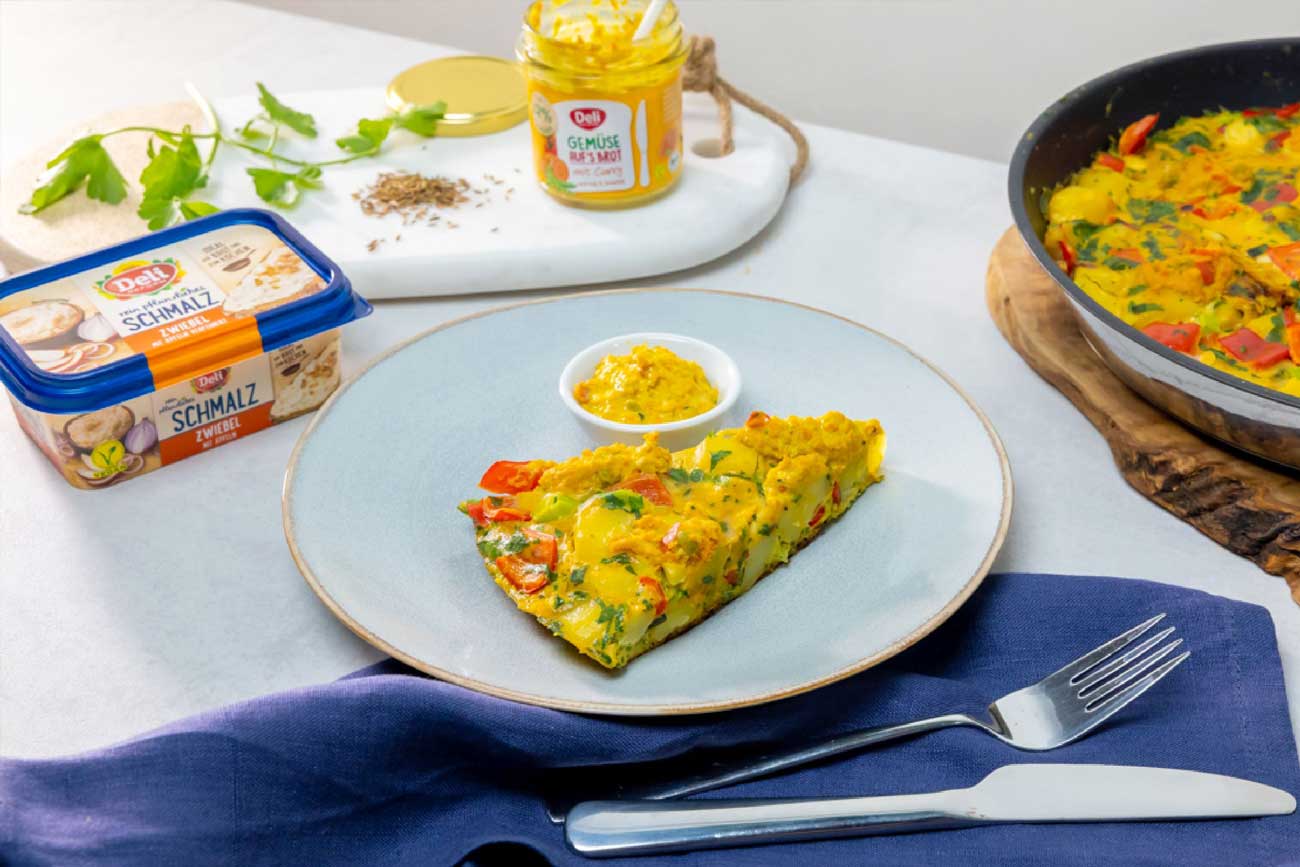 Breakfast doesn’t always just mean rolls with sausage and jam. The start of the day can also be incredibly tasty vegetarian. A vegetarian diet not only benefits the environment, but is also healthier and more digestible for humans. It is important to ensure a balanced composition. Conscious vegetarian diet can help strengthen the immune system.

The first meatless recipe leads to the north of Spain to Navarra, where the tortilla de patatas originated.

Although Spanish cuisine is generally considered more meat- and fish-heavy, it also offers many vegetarian alternatives, such as the juicy and high-energy tortilla de patatas. Deli Reform gives the dish an extra serving of vegetables and vitamins. After the pre-cooked potatoes are fried in Deli Reform onion lard, diced red peppers and spring onions are added. Finally, the seasoned vegetables are topped with a delicious spiced egg mixture that binds the remaining ingredients together and turns the vegetables into a tortilla. The Deli Reform vegetables on bread curry spread, spread in drops on the tortilla, turns the classic Spanish dish into a delicious breakfast with an Indian touch. The potato dish can be enjoyed hot or cold and is not only good on the plate in the morning – the tortilla is often also eaten for lunch or dinner.

Once across the Atlantic

Those who prefer to start the day with something sweet should try the fluffy blueberry pancake (or blueberry pancake, as the Americans call it). The pancakes are especially moist when Deli Reform Das Original is used, deliciously fluffy when the egg yolk and egg white are beaten separately and more nutritious if you use spelled flour instead of wheat flour. The blueberries are spread on the pancake as soon as the pancake is in the pan, where it is baked in Deli Reform Das Original until golden brown. If you don’t like blueberries or just want to try something different, you can also replace the blueberries with other fruits such as plums. When the finished pancakes are neatly stacked on a plate, they are drizzled with a little coconut blossom syrup. It not only tastes great, but is also a healthier alternative to processed sugar as it doesn’t raise blood sugar as much.

The American French toast can be compared to the German poor knight. While in Germany stale, somewhat stale bread is usually used, the American variant, as the name suggests, is based on a slice of toast. It is soaked in a buttermilk and egg mixture and then fried golden brown in Deli Reform Simply Cooking. To give the whole thing a summery fresh twist, there is a mixture of Deli Reform Die Leichte and freshly chopped mint as well as frozen berries “on top”. A pat of butter as a topping is actually usually with French toast, but the low-fat margarine Deli Reform Die Leichte is the healthier alternative, purely vegetable and with natural omega-3 fatty acids.

If you want to try even more breakfast classics from around the world, you should definitely check out the Deli Reform website. There are countless vegetarian recipes waiting to be baked, fried or boiled.