Healthy start to the day
Chocolate porridge: Recipe for a creamy porridge in just ten minutes

A creamy chocolate porridge fills you up, warms you from the inside and provides the body with many nutrients. It is prepared in no time and forms the perfect basis for an eventful day. The recipe.

Porridge is very popular around the world. No wonder, after all, the creamy porridge not only tastes irresistibly delicious, but is also really healthy. There are a number of variations and recipes: either creamy or spicy, sweet with syrup or of course with lots of fruit. With or without nuts, baked overnight or soaked – the possibilities are almost unlimited.

First meal of the day

Eat breakfast like a king or is it better to skip it?

Origin of the oatmeal

The word porridge dates back to the 17th century and goes back to the expression “potage” as a modification of the French word “potage”. A soup was called “potage”. The “pot” comes from the cooking pot. However, contrary to the name, the practice is much older. Chopping or grinding grain and cooking it in a pot of water or milk has been with us for about 12,000 years and goes hand in hand with the evolution of mankind from nomadic hunter-gatherers to sedentary farmers . There is no exact origin of the porridge. The preparation of rice porridge has been documented for 4,500 years in China, while in other regions such as South America, quinoa was consumed in the form of porridge more than 3,000 years ago.

Porridge as we know it today goes back to the Scottish oatmeal, which is prepared by gently simmering oat flakes in water, usually with the addition of a little butter and a pinch of salt. By the way: In the 18th century, the nutritious porridge was primarily considered “poor man’s food”. The porridge, which solidified as it cooled, became thick and firm and could be eaten for several days – sliced, fried or stirred again to form a porridge. It is all the more remarkable that in the meantime the hot porridge has worked its way up to become the absolute trend food – optically more beautiful, tastes finer and under a much better sounding name. Gourmet restaurants in London, Paris and New York even serve variants such as oat arancini or Sacher torte porridge. The revival of the traditional dish cannot be stopped.

However, what makes porridge so special is not only its traditional history and variability. The breakfast classic is nutritious, filling and provides us with a lot of energy. Oatmeal provides large amounts of fiber, thus ensuring long-lasting satiety and also aids in digestion. They are rich in vegetable proteins, numerous minerals and an incredible amount of vitamins B1 and B6, which in turn strengthen nerves and memory. Last but not least, plenty of zinc supports the immune system and ensures beautiful skin, hair and nails. Raw cocoa powder can also be called a superfood. This not only makes the porridge deliciously chocolatey and creamy, but also provides the body with many vitamins, calcium, iron and above all magnesium. It is also rich in antioxidants, which protect cells and bodies from premature aging and damage.

Five hot dishes for the morning 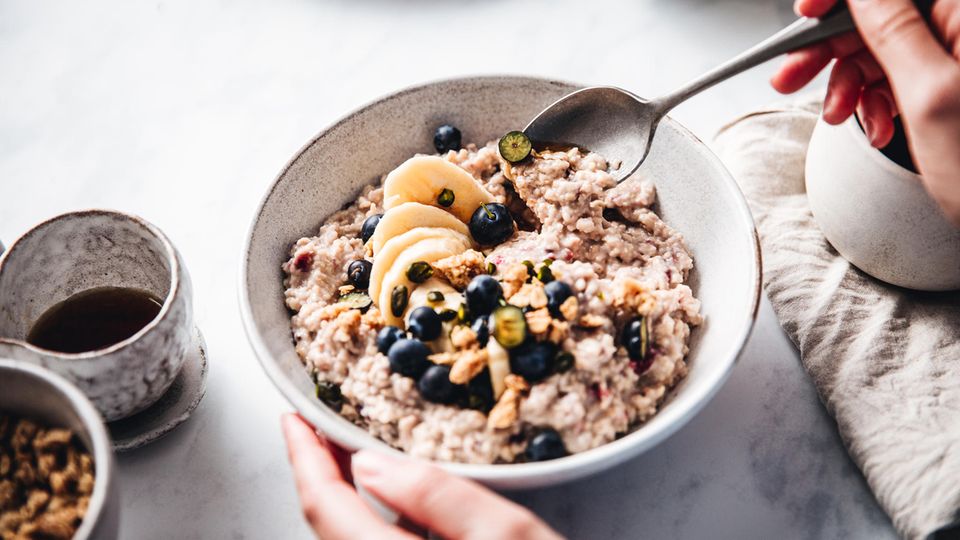 In traditional Chinese medicine, a hot breakfast has long been sworn to – it’s considered easier to digest and said to benefit life energy. Since the body does not even have to heat the food to body temperature, it can process the food better. This, in turn, can relieve digestive problems such as gas and bloating. In addition, a hot breakfast should keep you full for a long time, warm you from the inside and support the immune system – not least because a large part of the immune cells are in the intestines.

Prepared in no time

The porridge, which is prepared in just ten minutes, definitely belongs in the “quick but tasty” category. The oatmeal is cooked with milk, cocoa powder and a pinch of salt. Honey or agave syrup provides sweetness, but you can also use any sweetener of your choice. Then chopped dark chocolate goes into the saucepan – it melts in the hot oatmeal and ensures absolute chocolate enjoyment. There are no limits to your imagination when it comes to tops. Banana, nut butter and cocoa nibs harmonize particularly well with the chocolate oatmeal. Also delicious: tangerines, cinnamon and walnuts for a wintry twist or berries and yogurt for a fresh touch. Voilà, the ready-made porridge is steaming in front of you and waiting to be eaten. Good appetite.

Recipe for a creamy chocolate pudding